It’s the middle ground between wine and beer, and more and more are trying locally grown & produced Cider here in Niagara. The region boasts 10 cider makers, who are proving that more than our grapes are worthy of pressing and fermenting. So are our local tree fruits. A few of the region’s cider makers, including the award-winning Niagara Cider Company, Garage D’Or and 26 Acre Craft Cider Company, offer a tasting room experience. Many are housed inside of local wineries, who have added hard cider to their offerings as the thirst for this beverage has grown.

Niagara’s unofficial cider trail stretches across the region, showing a diversity of styles and flavours that will leave fans of this drink hard-pressed to choose a favourite. Whether you prefer an unadulterated hard apple cider or like to dabble in something with a peach or pear base — even pineapple — there’s something for everyone in Niagara’s cider scene.

Technically, this cider maker exists just outside Niagara’s borders. But you can see the sign welcoming visitors to Niagara Region from this 220-year-old fruit farm, making the Puddicombe family, who run the place, honorary Niagarans.

Puddicombe Cider started in 2010 with its flagship Sir Isaac’s Pear, based on the classic English Perry. The beverage was part of a business plan to use the farm’s pears, once destined for a now-shuttered fruit cannery. What started as few barrels grew into an empire with the Sir Isaac’s line expanding to include an apple and peach cider. The Puddicombe Family Tree brand of dry and rustic Loyalist-style ciders was added a few years later and pays tribute to the family’s United Empire Loyalist roots.

Flavours include cranberry and pineapple, along with crisp dry-hopped versions of apple and pear. Today, Puddicombe’s is one of the largest craft cideries in Canada, offering tours and hosting festivals in the beverage’s honour.

This premium dry cider features 10 varieties of apples ranging from the tart Northern Spy and Golden Russet to the sweet Ambrosia and Honey Crisp — each one balancing out the other. All apples are sourced in Niagara and their juices are fermented in stainless steel before moving to neutral oak barrels. Fielding Craft Cider is light and bright and can be sampled in the winery’s tasting room overlooking sweeping vineyards on the Beamsville Bench, one of the many sub-appellations of the Niagara Escarpment.

One of Canada’s most acclaimed biodynamic and organic wineries threw its hat into the cider ring in 2015 after excruciatingly cold winters took a toll on grape crops and something was needed to fill the void. The result is an an off-dry sparkling cider sold in cans and featuring a blend of five varieties of Ontario apples. The winery is a sight to behold, so after sampling the cider in the tasting room, take a tour of this state-of-the-art facility with its six-level gravity flow design, geothermal system, wetland bio-filter and 200 acres of pristine vineyards.

This fruit winery is one of the region’s original hard cider makers, turning out kegs and cans of its Ironwood Cider long before the current craft cider boom. Even with other wineries jumping on the cider bandwagon, Ironwood continues to be a perennial favourite among cider drinkers. This cider tends toward the dry end of the spectrum and is made with a handful of heritage apple varieties, including the Northern Spy, Empire and McIntosh, which are balanced by the more recent additions to the apple family tree, Gala and Ambrosia.

Just down the road from Sunnybrook Winery is the whimsical Small Talk Vineyards, home to some of the most inventive ciders coming out of the region. Small Talk was an early adopter of ciders with its Shiny Apple Cider, an off-dry, red apple concoction. It was joined soon after by a surprising red apple-Pinot Noir blend. Those flagships have since grown to include a peach-apple blend, a seasonal offering that’s now available year-round due to demand.

Other ciders include the popular spiced apple, a salted caramel edition that conjures candy apples, and a floral and fruity juniper and orange cider. Hard ciders have become such a prominent part of the Small Talk portfolio that it now boasts the Shiny InCider Club with exclusive creations for members.

Crisp, dry cider is a calling card here. Ravine carries a hard apple cider, a perry made with Cold Snap pears, and a seasonal peach version sold under its Lowrey Bros. label, which is a throwback to the family’s farming history in Niagara. You can sample Lowrey Bros. ciders in the winery’s tasting room or at Ravine’s restaurant featuring quintessential wine country cuisine — all that’s seasonal and local and pairs well with a glass of cider or wine.

There’s also an outdoor pizza kitchen, patios with stunning views, and access to ping pong tables and other activities. Rumour has it drinking cider improves your game.

College isn’t what it used to be. These days students are learning how to make hard cider and they’re proving to be aces at it. Cider 101 is a modern, dry cider available year-round at the college’s Wine Visitor and Education Centre, where guests learn about all things craft cider in Niagara and beyond. It’s where you’ll also find some of the students’ single-batch creations, including an award-winning bottle-fermented Brut cider made from russet apples.

The college’s hard ciders have become the apple of many people’s eyes, including judges at the U.S. Open Cider Championship, where Cider 101 has competed against others from throughout the world and won multiple gold medals since it was launched in 2015.

Niagara’s hard ciders are the cherry on top of this region’s storied beverage scene. They’re another example of how Niagara’s knack for quenching the thirst of just about anyone, no matter what they prefer in their glass. 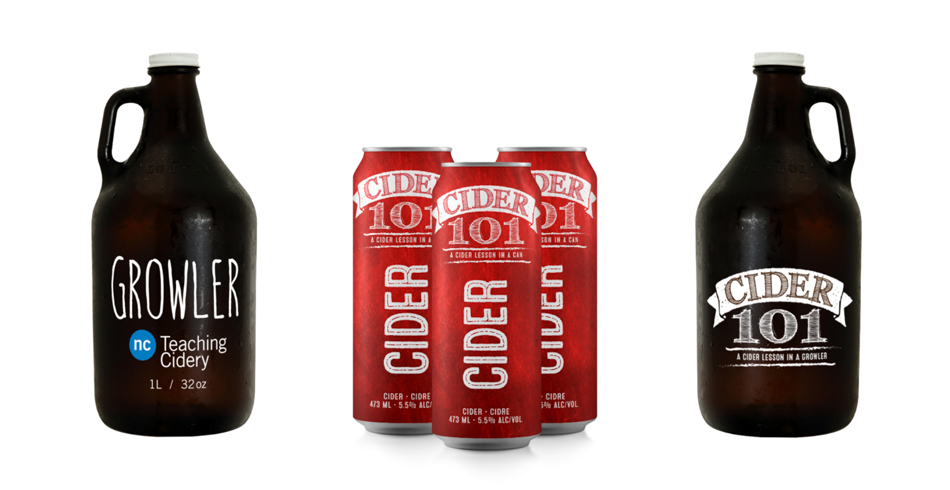