Fall in Love with Fall

It’s easy to fall for Niagara in autumn.

Farm stands loaded with diverse harvests operate at full throttle early in the season. By the time they shutter for the year, the leaves have started turning and the Niagara Escarpment becomes a breathtaking swath of technicolour boasting every shade of copper and gold. Wineries buzz with activity as grapes are harvested and the region’s world-class winemakers tease out the story of another vintage. Niagara sparkles at this time of year and there are more than a few places where it really — and rightly — shows off.

This provincial park on St. Catharines’ western edge is the place to reconnect with Mother Nature and yourself, especially as the weather cools and the changing colours set the place aglow. Whether or not the pastiche of steep hills here feel short when you’re hiking on them, the name of this provincial park comes from the spirited Twelve Mile Creek forging through sedimentary deposits and glacial till, creating “short hills” in the process.

The park spans more than 660 hectares and is filled with six side trails connecting to the mighty Bruce Trail, Canada’s oldest and longest footpath stretching from Queenston to Tobermoray. Short Hills is a great beauty to behold in any season, but none so much as in the Fall while walking under a canopy of colourful foliage along this storied trail system.

It’s also filled with wild foods native to the dense Carolinian forest that reaches from the Carolinas into Southern Ontario. You can find such tree-grown treats as the pawpaw, a Kosher dill-sized fruit with creamy flesh that tastes like a cross between a banana and mango; sweet chestnut; and the Kentucky Coffee, whose seeds can be roasted and used as a coffee substitute.

There are plenty of other wild edibles, including mushrooms, leeks, garlic mustard and burdock. Just remember that foraging in provincial parks is only allowed when it’s for personal consumption. Please leave behind more than you take.

Not far from Short Hills is another park-like setting, this one focusing on the bon vivant’s holy trifecta of wine, food and art. 13th Street Winery is co-owned and operated by third generation farmers Doug and Karen Whitty, and it’s truly the whole package when it comes to experiencing Niagara in a glass and on a plate.

13th Street has made its mark with award-winning Gamay Noir, a light red that hadn’t always been taken seriously until winemaker Jean Pierre Colas showed the magic that could be worked with a Gamay grape grown in the Whitty vineyards. Gamay Noir is now considered one of Niagara’s flagship wines thanks to such vintners.

This winery has also made a name for itself for another reason: its iconic butter tart. It’s a quintessentially Canadian treat represented a dozen different ways thanks to a Whitty family recipe. There’s the classic plain, raisin or pecan for the purists. But there are also super-indulgent spins, including one based on Turtles chocolates and others with raspberries & coconut, and icewine. They’re a sweet tooth’s calling card, beckoning butter tart fans from all over Ontario. 13th Street’s editions were even voted Canada’s Best Butter Tarts by House and Home Magazine in 2017.

For those who don’t want to start with dessert, chef Josh Berry focuses on what’s in season in the 13th Street Bistro kitchen. The winery market also offers take-home options, including its wildly popular salsa, frozen soups, and preserves.

No visit is complete without wandering the pristine grounds dotted with a curated collection of Canadian art. The entire space, indoors and out, is begging to be photographed so don’t forget the selfie stick.

Whoever coined the term agritainment must have had Howells in mind. This off-the-beaten-path attraction was a surprise hit through the summer of the pandemic with a cosy beer and wine garden set up in a greenhouse and stretching outside, where heaters fend off the chill in the air at this time of year. The bar serves up local vintages and brews by the glass. For those feeling peckish, poutine and charcuterie are options, all while beholding the expansive views of Pelham’s rolling hills.

Howells is a beacon of activity with its corn maze, seasonal-themed family fun and rides for children of all ages, candy apples, and of course, a pumpkin patch.

Fall is arguably among the best times of year to visit Niagara. Whether it’s spending time among the unadulterated natural features or enjoying those sippable, snackable attractions that have been teased from the earth by a knowing human hand, Fall in Niagara is prime time to experience everything the region offers. 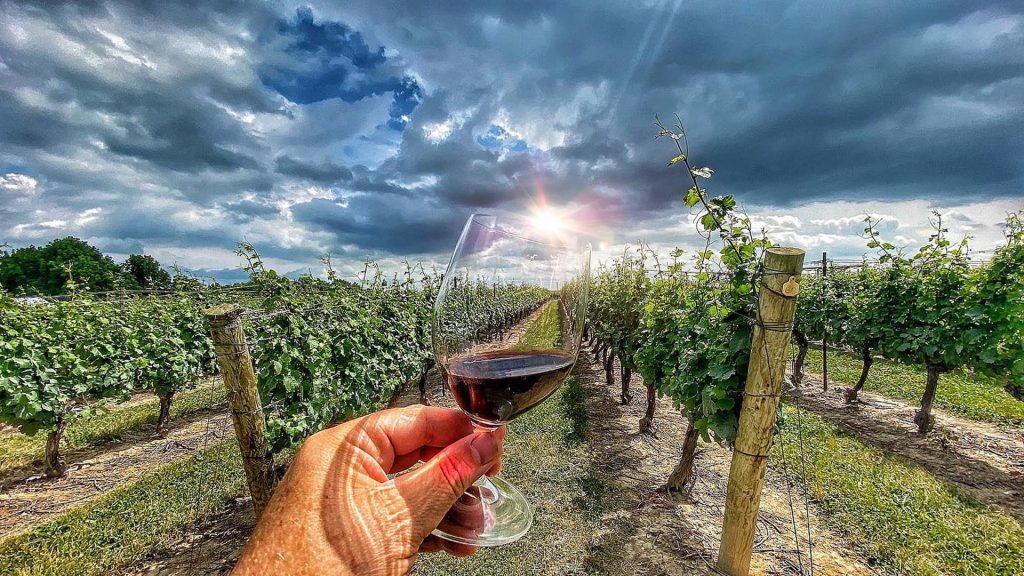